This morning it was announced that Dana Guthrie Martin will not be able to serve as a judge for Project Verse’s Week 10: Final Assignment. Click here if you missed the post with all the details.

Matthew Hittinger is stepping in to fill Dana’s spot for the Week 10: Final Assignment. Not only did Matthew serve as the guest judge for Week 3: Simile Vs Metaphor, he has been following Project Verse since Week 1.

Steve Fellner writes about a poem by Matthew Hittinger.

D.A. Powell and David Trinidad cooked up a little something.

I am thrilled to have “Mercy” and “The List” as well as interview with Denise Duhamel in the third issue of the Ouroboros Review along with work by Denise Duhamel, Karen Head, Matthew Hittinger, Michelle McGrane, Rupert Fike, and many more.

Having “The List” published has put a huge smile on my face because it is one of my personal faves out of all the poems I’ve written. I wrote it when I was 20 or 21, and I never had any luck when I’d send it out to mags/journals/etc. Here is a big ole THANK YOU toJo and Christine for giving “The List” a home!

Denise Duhamel has two poems in Ouroboros Review #3. One of the poems, “Queen Colleen,” was written in response to a challenge I gave Denise back in March of this year. Don’t forget to check out “Queen Colleen.”

Matthew Hittinger earned his MFA in Creative Writing from the University of Michigan where he won a Hopwood Award and The Helen S. and John Wagner Prize. Shortlisted for the National Poetry Series, the New Issues Poetry Prize, the Marsh Hawk Poetry Prize, and twice for the Walt Whitman Award, Matthew has received the Kay Deeter Award from the journal Fine Madness and three Pushcart nominations. His work has been published in many lit mags, and he is the author of the chapbooks Pear Slip, winner of the Spire Press Chapbook Award, Narcissus Resists (GOSS183/MiPOesias, 2009) and Platos de Sal (Seven Kitchens Press, 2009). Click here to visit his blog.

Check out WHY DO I WRITE participant Matthew Hittinger on the cover of the latest issue of MiPOesias.

Get your own – Open publication

WHY DO I WRITE ~ Matthew Hittinger 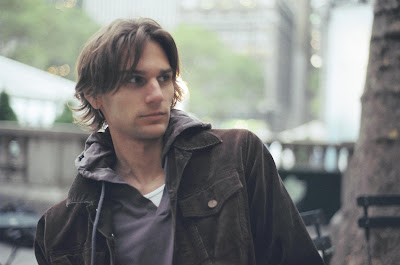 It’s not like I’m writing a poem every day. Far from it. But when I do, when some image or idea has so stuck itself in my head that I have to keep turning it over and over, attacking it from as many angles I deem possible, when I’m in those writing jags and the work is coming fast and fully formed after months of contemplation, when I’m in “that zone” as my first writing mentor used to say, I feel more present and grounded than at other moments in my daily life, as if the true self, call it mind, call it voice, is suddenly struck in high relief (or is suddenly striking a pose) by this concentrated act of pulling and placing words together.

And though I do not write poems every day I remain engaged with the process every day whether that means testing out sentence rhythms in the million and one emails I feel get composed, or the notes I jot down on the backs of my bookmarks when a snippet of overheard conversation seems to resonate or an image I have witnessed burns itself into my retina, or even the reading I do on the subway on my way to and from my day job to see how others go about the dance.

So even though I do not write in that concentrated way every day, if I had to pinpoint what it was about writing that keeps me doing it I’d have to say the process. Don’t get me wrong, I love the end product when the formal choices of word-music and rhythm and imagery all click together, but I love living in the process for as long as I can. The white page never terrifies me as I always work from notes. As long as I have those raw materials, a handful of words, I can spin in any direction, rhyming and chiming, arranging their placement like the seating chart for a dinner party to see which order is the best order, which cadence conveys the meaning best, all the pleasures of crafting a form that captures the actual process and takes the reader along on all the twists and turns of thought, the choices made along the way.

For ultimately that is why I write: to create snapshots of the brain in motion, to document the process of thinking, thinking about feeling, about the emotional states in which one finds him or herself, making sense of the experiences we have with each other, with the world at large, and that ongoing conversation with the self that on some level is in constant marvel at being a sentient being, of having consciousness and conscience. And doing this all within the constraints of form, setting down our individual way of seeing in a construct that will last, that will allow another to step behind your eyes in that ultimate empathic act. This is why I write.